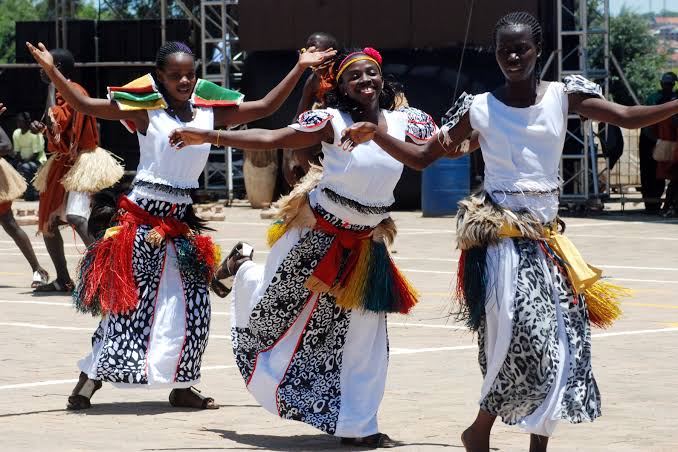 The culture of Uganda is made up of a diverse range of ethnic groups. Lake Kyoga forms the northern boundary for the Bantu-speaking peoples, who dominate much of east, central and southern Africa. In Uganda, they include the Baganda and several other tribes. In the north live the Lango and the Acholi, who speak Nilotic languages. To the east are the Iteso and Karamojong, who speak a Nilotic language, the Gishu are part of the Bantu and they live mainly on the slops of Mt Elgon speaking Lumasaba, closely related to the Luhya of Kenya. A few Pygmies live isolated in the rainforests of western Uganda.

Uganda is home to many different ethnic groups, none of whom forms a majority of the population. Around forty different languages are regularly and currently in use in the country. English became the official language of Uganda after independence. Ugandan English is a local variant dialect.
The most widely spoken local language in Uganda is Luganda, spoken predominantly by the Ganda people (Baganda) in the urban concentrations of Kampala, the capital city and in towns and localities in the Buganda region of Uganda which encompasses Kampala. The Lusoga and Runyankore-Rukiga languages follow, spoken predominantly in the southeastern and southwestern parts of Uganda respectively.
Swahili, a widely used language throughout eastern and central East Africa, was approved as the country’s second official national language in 2005.

According to the census of 2002, Christians made up about 84% of Uganda’s population. The Roman Catholic Church has the largest number of adherents (41.9%), followed by the Anglican Church of Uganda (35.9%). Evangelical and Pentecostal churches claim the rest of the Christian population. The next most reported religion of Uganda is Islam, with Muslims representing 12% of the population. The Muslim population is primarily Sunni; there is also a minority belonging to the Ahmadiyya Muslim Community. The remainder of the population follow traditional religions (1%), Bahai (0.1%), or other non-Christian religions (0.7%), or have no religious affiliation (0.9%).

Uganda is a home to many tribes that speak different languages. Uganda has 56 tribes and about nine indigenous communities that formally came to be recognized in the 1995 constitution amendment of 2005. English is the official language of Uganda. Luganda and Swahili are also widely spoken in most parts of the country. There is also French, Arabic and Germany mainly in institutions where they are taught and at embassies.

Jothado Safaris (U) Ltd is a tours and travel company located in Kyaliwajala Naalya Road, Approximately 500m off Naalya Roundabout in Uganda.