Get to Know Volcanoes National Park.

Situated in the far northwest of Rwanda, Volcanoes National Park is one of the famous tourism destinations on the continent with rare mountain gorillas approximately 480 mountain gorillas, just over half the world’s total which sites along the Virunga Mountains in the Democratic Republic of Congo. Here is a setof experiences with adventure-rich stories. The dramatic landscape also offers thrilling hiking and visits to the fascinating golden monkeys.The parkis a home to over 10 gorilla families’also mostly known after the famous primatologist Dr. Dian Fossey who arrived in this park in 1967 setting up Karisoke Research Centre between Visoke and Karisimbi. The birdlife is also resident in the Park with over 300 bird species such as African marsh harrier, common moorhen, long-crested eagle, grey throated tit, paradise flycatcher, red-faced woodland warbler, and among other bird species. 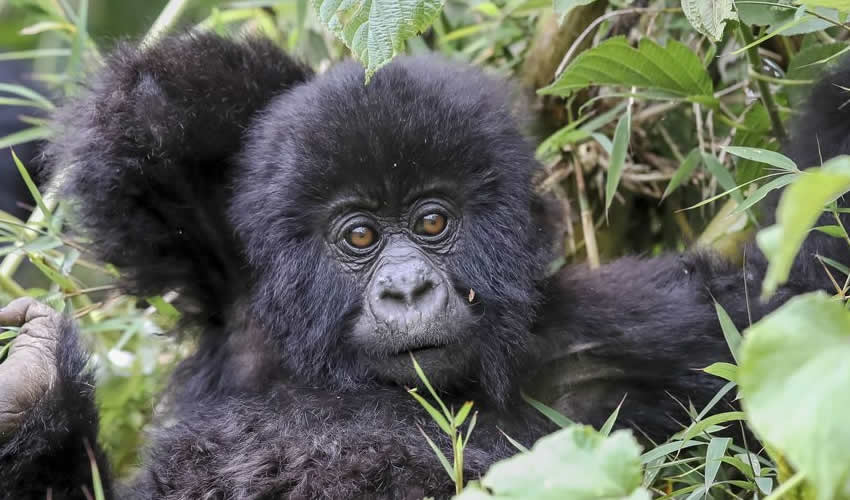 What to do in Volcanoes National Park.

Taste the raw flavors of Rwanda’stop experience, come face to face with the mountain Gorillas make their natural home. There are 10 gorilla groups in the Volcanoes National Park. These habituated gorilla families that have been trained to tolerate human present making organized gorilla trekking, an amazing experience of looking into a silver back’s eyes, or watching this magnificent creatures go about their day, taking care of their young, feeding.The entire experience is simply magical

Discover why Rwanda is a land of primates. Golden monkey tracking is one of the most extraordinary and exceptional tourism activities that draw thousands of visitors from all corners of the world to Volcanoes National Park. This striking activity leaves a total contentment in the hearts of the participants because they get an opportunity to trek and hike through this body refreshing mountain and meet face to face with these rare and endangered primates.

A truly unique experiences in the area. Hike to the graveyard of Dian Fossey is awesome experience with little exhibition before doing the Gorilla tracking. The place is very informative and one learns a lot in just half an hour. It´s amazing to see the legacy of Dian Fossey, not only in the Research Center but the results in conservation of such great living being, in such a vigorous trek with excellent guide who provided valuable history of the life, death, and accomplishments of Dian Fossey.

A birders paradise, rich in avifauna which includes many of the Albertine Rift endemics. Three globally threatened species namely; Lagden’s Bush-shrike, African Green Broadbill, and Kivu Ground Thrush. Besides, 17 of the 25 species of the Albertine Rift Mountains Endemic Bird Area and 53 of the 74 species of the Afro tropical Highlands biome that occur in Rwanda have been recorded at the site.

Best time to visit the Park.

Anytime of the year (from January to December) but the dry season is preferred for most tourist activities in most National Parks. Months of January, February, June, July, August, September and December fall within the dry season and are characterized by clear skies, less rain and much sunshine. April-May is the rainy season, which means the ground is constantly wet and trekking activities becomes challenging during heavy downpours.

Where to stay in Volcanoes National Park

One & Only Gorillas Nest Lodge.

Welcome to One&Only Gorilla Nest Lodge, a brand new jungle sanctuary luxury property on the edge of the Volcanoes National Park. Gorilla Nest Lodge is now the second One&Only resort found in destination remarkable Rwanda. Perched in the foothills of the Virunga Volcano Range, wrapped in fragrant Eucalyptus forest, One&Only Gorilla Nest makes guests enriched with broadened perspectives on how to those who wish and want to explore this awe-inspiring Gorilla trek in Rwanda.

The lodge is situated about an hour’s drive from the park headquarters; Virunga Lodge is among the area’s top lodges and certainly has one of the most spectacular locations of any camp in Africa – high on a ridge overlooking both Lake Burera and Lake Ruhondo.

Located in the foothills of the Volcanoes National Park in the Virunga ranges. Sabinyo Silverback Lodge is perched close to the gates of the Parc des Volcans National, the most prominent hub for Gorilla trekking in Rwanda. Sabinyo Silverback Lodge is a SACOLA lodge meaning a community lodge, built and is operated by Governors Camp but is owned by the local community trust that use revenue generated from the lodge to drive socio-economic projects.

Bisate lodge is luxury lodge situated in the natural amphitheatre of an eroded volcanic cone, with dramatic views of the peaks of the Bisoke and Karisimbi volcanoes rearing up through Afro-alpine forests. Encountering one of the gorilla groups in the nearby Volcanoes National Park is a unique experience. Six opulent en-suite forest villas maximize comfort and views while adhering to environmentally responsible principles and reflecting the rich culture of rural Rwanda.

How to get to the Park.

By road from Kigali city, the park is just a 2.5 hour’s drive on a smooth surface road. The Normal and easy point to getting there is through Musanze to the park headquarters in Kinigi.
By helicopter from Kigali International airport, the flight takes 25mins to Musanze airstrip or to a lodge helipad you are booked at.