Chimpanzee Trekking in the wild is an exciting experience unlike majestic gorillas, who tend to sit and feed chimps squabble and socialize, climb up and down trees, feed, and fight, and generally keep you entertained. We are all familiar with Chimpanzees – after all, genetically they are 98 percent the same as us. But nothing matches seeing them in the wild. Observe just how human they are, who live in communities, it’s a family of 13 individuals, with a silverback male, with chimps it’s more like people. 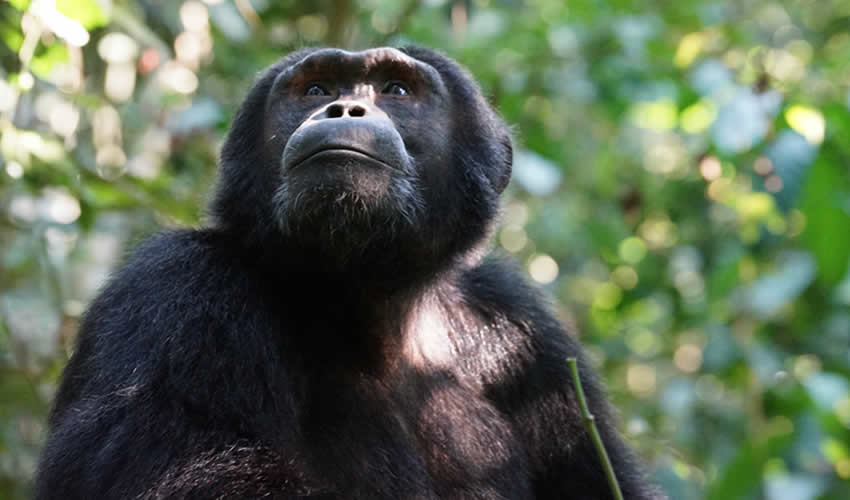 Chimpanzee tracking is not only fascinating but a lot of fun. It’s often a more active experience than gorilla trekking, which involves adopting a very submissive pose while in the presence of these forest giants. Chimps tend to move around more, and you can feel like a child on an adventure following them through the forest. The chimp groups you can track in Uganda have been habituated. This means that the presence of long-term research teams has made them less shy of humans and easier to view, without compromising or interfering with their natural behavior.

Uganda is among the world’s largest chimp population current estimates for the total wild population of chimpanzees range from 10,000 to 15,000, Almost 3000 are found in Kibale National Park, the most popular place for chimp tracking in the country and it also has a very high success rate for sightings.

Kyambura gorge is one of Uganda’s most impressive corners and the chances of seeing chimps here are lower than in Kibale, the incredible scenery is just as much part of the attraction. Budongo forest in Murchison falls with sighting rates of 85 percent and it’s a really nice experience as you feel you worked for your chimp sighting.

The chimpanzee habituation experience, which involves spending the day with less habituated groups (although this is never guaranteed), as part of the process of getting them ready for tourists to watch them. Non habituated chimps would have disappeared into the forest long before you could see them, but this process, which takes at least six years, slowly, slowly reassures them that humans do not pose a threat.

Chimpanzee trekking in Rwanda is only done in Nyungwe forests national park, this pristine rain forest that is home to several primates and special birds.